Convergence of a Series

Let us explore using simulation some of the concepts of basic asymptotic theory as presented in Wooldridge 2012, Chapter 3.

Paraphrase: A sequence converges on point a, if you can choose any positive number (any epsilon greater than zero) and you will find some point in the series after which the difference between the series and the point it converges to a will always be smaller than epsilon.

Let us try to make this more concrete.

Does this series converge on a value a? 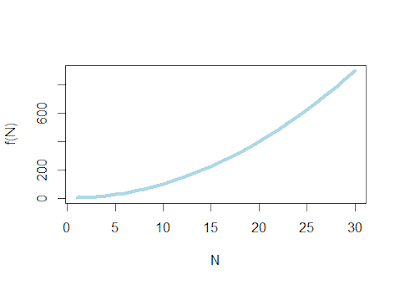 We can see that there is no a which could exist for which our series seems to converge within the positive bound epsilon=100. 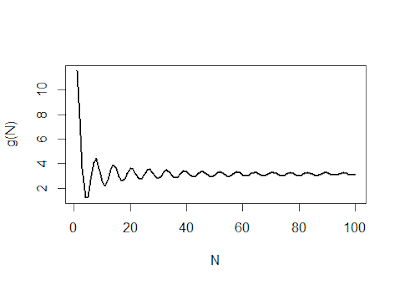 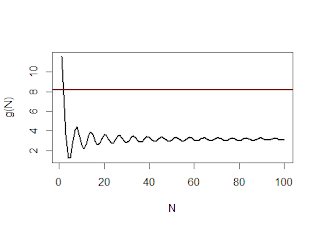 We can see that at N<10 there are some points which are not bounded by |N-pi|<e1. However by the time we get to N>20, all points are easily bound (at least those we have plotted). 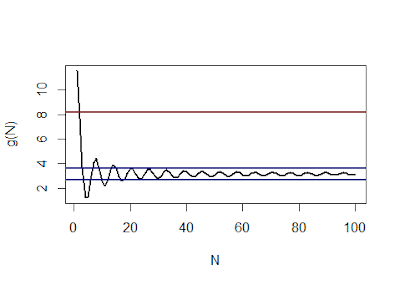 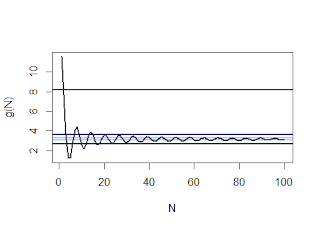 We can see that with e3=.1 there is no point on the graph we have plotted which is bounded by our epsilon. However plotting the graph at a longer series time frame will give us a number N after which g is bounded. 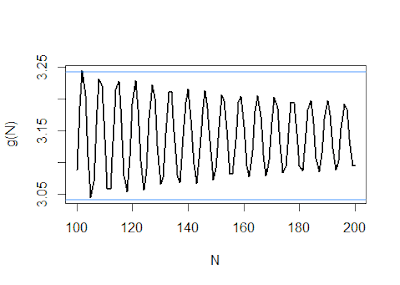 We can see that the graph clearly shows that at our small value of epsilon (.1) we are bounded around pi as early as N=110. For all other even smaller epsilons there will always be an N for which
this is true (even if our computers do not have sufficient accuracy to show this to be the case).

However, since we are working with an infinite series, this also means that there is an infinite area of the graph for which we can never plot. We therefore cannot use graphs to prove that series converge. In theory a series can always break the bounds just beyond the area of inspection. The switch function

Other series converge without oscillating:
$$f(N)=a+b/N$$

Make your own hotly criticized circle graph! The recent critical post on R-bloggers has got me wanting to make my own bubble graphs despite the popular criticism of the graph. After some attempts I have produced something that looks similar but needs some more work.

I would like to say briefly that R-blogger post by PirateGrunt while interesting and reasonable seemed to miss the point. The graphic was not supposed to convey massive amounts of information but simply to make obvious the scope and degree of how the current Ebola epidemic compares with other epidemics.

There are many good reasons to critique this graph from an epidemiological perspective (forthcoming), yet from a graphing perspective I think  this graph format is extremely efficient at conveying memorable information while the graphs assembled by PirateGrunt were more detailed they were also entirely forgettable unfortunately.

Here are a couple of examples. The first is with meaningless simulated data demonstrating how large differences in scale may appear. The second is actually using HIV prevalence data to give a graphical representation of how such rates have changed over the years. You can fine the code as well as the data on github.

Table 1: Demonstrates how scale can be communicated by size of circle

Table 2: Demonstrates the relative stability of AIDS in terms of people ill. Top number is  year while lower number is millions of cases.
Posted by Francis at 11/03/2014 1 comment:

How generous has the international community’s Ebola response been?

Discussion on generosity of international donors.

How generous has the international community’s Ebola response been?
Posted by Francis at 11/02/2014 No comments: