* This simulation is inspired by the work of the blog FiveThirtyEight (http://fivethirtyeight.blogs.nytimes.com/).

* In order to make the simulation more interesting, I spent some time collecting real data.

* I have collected poll data from RealClearPolitics.com on nearly all 50 states and DC.

* Then load it into Stata.

* You will find that it has information listed by poll then by state alphabetically.

* The variable Sample is the number of people sampled while the MoE is the margin of error.  This is basically half the confidence interval.

* You will also find variables Obama and Romney which is the percent of people indicating that they would vote for that condidate.

* The final bit of interesting information is the Electoral_College information which counts the number of votes associated with that state.

* The first problem you will notice is that some states do not have information.

* I have filled in the Romney and Obama values based on RCP's likely vote values.

* The second problem you will note is that the MoE and Sample are considered Text while what we need is Numbers.

* Let us assume that the states that do not have poll information are either solidly Obama or solidly Romney.

* Let's simply choose a sample size and MoE for missing values that will make the percentages not change.

* The first thing I would like to do is get the State average across the polls for both the variance estiamte and the means.

* If we assume that each poll is equally valid then to calculate the State average.
*  For Obama: Total Mean=Sum(Obama/100*Sample)/Total Sample
* Same for Romney

* Note: this number is usually adjusted for representation within the total population.  Thus, we get numbers that are not whole as a result of this calculation.

* Now the trickier part is calculating the total variance by the state.
* First let's remember how the se is calculated: se=sd/n^.5
* We want to solve for the "individual" standard deviation => thus sd=se*n^.5 => sd^2 = var = se^2*n
* The reason we want to have the variance estimate is because variances can be added together assuming observations are independent which should be true in polls.

* Once we have our variances we would like to sum them together to find our total sample variance
bysort State: egen var_total = sum(var_hat)

* Finally we would like to turn our total variance estimate back into a standard error.
* Thus: se=(var^.5)/(total_sample^.5)
gen se_total=var_total^.5/Sample_Total^.5

* We can see the majority of the states swing Romney
gen obama_electoral = Elector if (obama_romney>0)
sum obama_electoral
di r(mean)*r(N)
* However, just based on State averages we would expect Obama to take 307 electoral votes.

* Does our analysis end here?  It need not!  Thus far we have calculated the most likely outcome.

* Let's now try to figure out how frequently overall Obama will win (of all possible outcomes).

* For this, we will use simulation!
cap program drop election2012
program define election2012, rclass
preserve

* This simulation, as far as simulations go will be pretty straightforward.
* First let's rescale our voters so they they must either vote Obama or Romney and so that the number of interest is only likelihood of voting Obama.
gen obama_p = obama/(obama+romney)
* I am not sure how these pollsters generate their margin of error or more particularly what it is relative to.


* This will be the only tricky part of the simulation.
* I would like it to be possible to specify the correlation in errors between states.
* I will only allow one correlation to exist.
gen cor_e = rnormal() if _n==1
* cor_e is a common error among all states


* Now we will add in our random variance component
gen obama_final = obama_p + e*(se_total/100)*`se_scalar'
* Note the se is in percent units but obama_p is in proportion so we need to divide by 100. 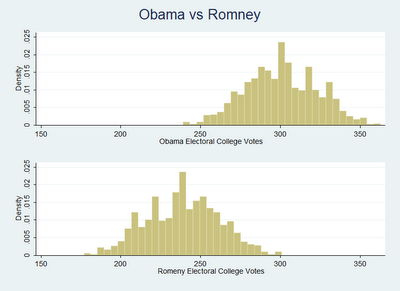 * Now let's add a fairly strong correlation in errors .4
preserve
simulate, rep(1000): election2012 .4
sum
* Repeating the simulation 1000 times, I get that Obama wins 79% of the time.  This is because we are in effect increasing the total system error by making it covariant causing the outcome to approach 50%
restore

* Finally, let's double the standard errors arguing that polls suffer for random measurement error.
preserve
simulate, rep(1000): election2012 .4 2
sum
* Repeating the simulation 1000 times, now Obama wins only 66.5% of the time.
* Is this something to worry Obama supporters?  No, not really.
* If we increase the variance of the error then of course everything moves towards the mean - 50% victory.
* But realistically, it is probably not justified to double the standard deviation of the error.
restore