Diagnosing the Multilevel Marketting Trap: How MLM Survives Only through New Entrants

Over the years I have been amazed by how many friends of mine who seem otherwise very intelligent have gotten involved in Multilevel Marketing (MLM).

And, as most people who have been involved with these organizations, all of my friends involved in these organization have ended up after many hours and sometimes years of effort with less return for their efforts than what the paid to be part of the system. Many of these MLMs call participants "Independent Business Owners" (IBOs).

The problem with multilevel marketing is that it sounds like it should work!

You, the IBO, buy products at wholesale price that you are in turn sell to someone else at retail price. You get the majority of the revenue from the sales of these products. Some smaller portion of the revenue is distributed to the person who recruited you and some portion to the person who recruited that person all the way up to the top. Simple right?

Pretty picture that just does not seem to work out for just about anybody.

Thus, MLM is really much more like a house of cards. The first ones in have a good position, but the later you enter the system the more vulnerable you become.

But don't take my word for it. You can simulate it fairly easily. (Well not so easy but I will show you how to. Find the code here)

The simulation works as follows:
1. First there is one IBO, that IBO is able to interact with a number of other agents. Some of those agents the IBO will sell to based on a random probability (in this case 20%) and some of those agents the IBO will infect or convert to other IBOs base on probability again (10%).
2. A successful sales yields a return of $10.
3. Each round costs $10 to remain an IBO.
4. An IBO also makes commission on sales from anybody that IBO has recruited or that IBO has recruited. The commission rate is 25% meaning each upstream person makes an extra 25% on the sales of the downstream person.
5. Each IBO actively engages in sales and recruiting and meets 30 people per time period.
6. Once approached by one IBO in a time period additional approaches will be all rejected for that time period.
7. IBOs cannot recruit or sell to each other or former IBOs (defined as "immune" from the MLM)
8. Each encounter costs the IBO $1 of effort.

Other Factors:
Which can be varied but do not affect the big picture. Results not presented here.
1. Sales rate: You can change how effective individuals are at selling dramatically without having any significant effect on the long term sustainability of the model. If individuals are less effective at selling then participation will increase vulnerability to dropout within the MLM model resulting in faster burn-out rates.
2. Recruitment rate: You can increase the recruitment rate or decrease it and this will only cause the population of IBO to peak either faster or slower. Either way always leading to the same end result eventually.
3. Population size. Increasing the population larger than 100 thousand tends to slow down my machine but I did run it once with a population of 1 million up to round 40. The result is nearly identical to that of a population of 100 thousand. The only difference is that the peak recruitment occurs one round later. Because the MLM model relies upon an exponential growth model you would need to continue to increase the size of the population exponentially each round to make it sustainable.
4. Return from sales: It does not matter how much profit each sales is worth, eventually the market will get saturated and people will start dropping out.
5. Encounters per round: Like sales rate and recruitment rate this only changes the rate at which the system peaks but does not change the end result.

So here are graphs illustrating the results by "level" within the organization or rather time period of entry into the model. 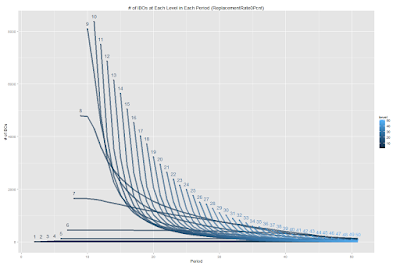 Figure 1: This graph shows how many IBO's exist at each level during each time period. The first period of a each level is by definition the maximum number of IBOs in that level. The majority of the time they drop out of the model. In period around 12-15 there are the most new IBOs. But as the market gets saturated, they quickly drop out. 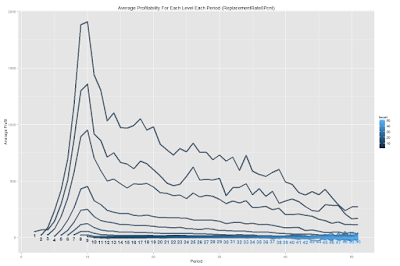 Figure 2: And why drop out, you ask? The problem is that the market is saturated. The above graph shows anybody who has not entered by period 6 is going to have difficulty making a living. Remember the dropout conditions are pretty strict. You need to loose $40 (your participation fee $10 and $30 in sales efforts) during a period in order to drop out. This only occurs if you pay you mandatory membership see and fail to make a single sale. 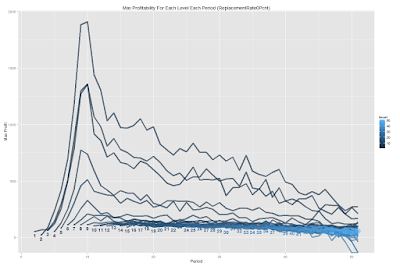 Figure 3: But what about the "top" people in their level? Aren't they doing well. The above graph shows the maximums for each level in terms of profitability. It is pretty much the same picture as the last. Unless you entered very early, you have to be very lucky to make any money. Remember that for these late entrants, there are thousands of them and this is the maximum profitability for the entire level. 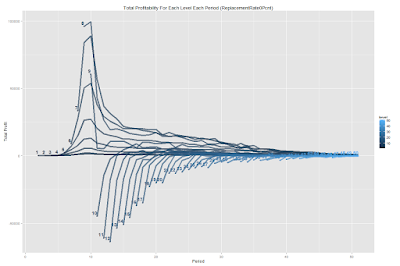 Figure 4: But some people are making money! How much money is made by each group of people in total? The above graph shows that the total amount of money for each level over the entire 50 periods of the simulation changes rather abruptly around period 11. This is the point when the market gets saturated. After that point people who enter are extremely unlikely to make any money.

Fine! But there is replacement in the world! New young people grow up and enter the system and replace those who have dropped out of the system. How does that change things? 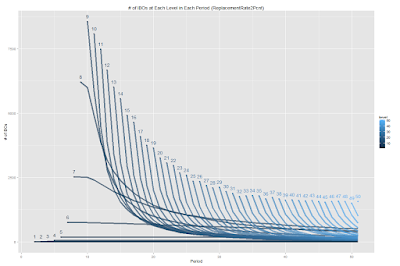 Figure 5: At a 2% population replacement rate we can see that recruitment while still down from early peak is more robust in the later periods of the model. 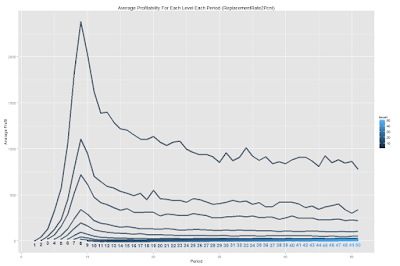 Figure 6: Does this mean that late entries are going to do better? This figure shows clearly that on average late entries are still going to do very poorly. The fact is that the market is saturated and clearing up 2% new replacement is not going to significantly affect the long term outcomes. 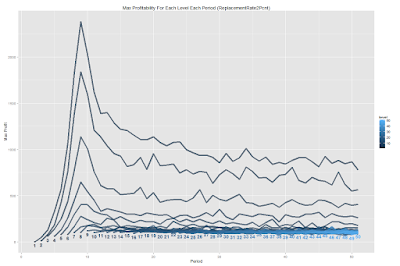 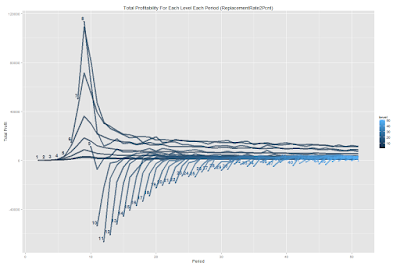 Figure 8: So what about the total profitability of those new waves of recruits? The story is essentially the same as with no replacement. Up to a certain point (round 11) there is money to be made but after that the people who generally loose money. The overall profitability of the model is unsustainable.

So, is the problem one of replacement? Perhaps if we had higher replacement rates then the model would work? For the following graphs, I set the replacement rate at 20%. This is a huge number but perhaps not impossible if you are thinking about developing nations where people are rapidly moving from poverty to middle class. 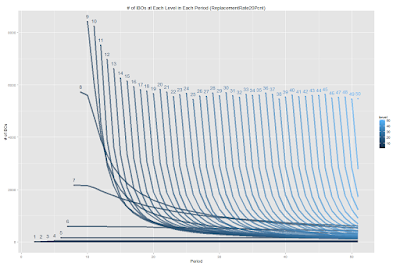 Figure 9: Does high replacement make the model more sustainable? This figure shows that this is not the case! The problem is that the market becomes saturated still in round 12-15 and though 20% of the population gets replaced, it remains saturated leading to massive and systematic dropouts in every period as new entrants find it nearly impossible to make sales. 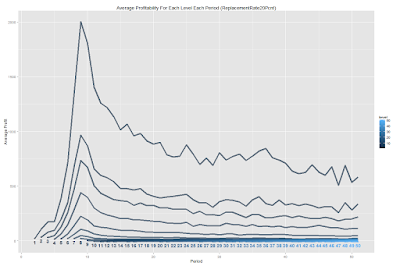 Figure 10: Well what about for those who stick it out? Does it become any easier? This figure answers that question. No, if you did not enter within the first 5 levels population replacement is not going to help. Why? Because the market is saturated! No matter how successful you are, the people you recruit will compete with the ones they recruit and in the end very few are going to make sales. 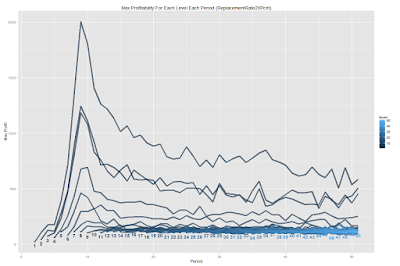 Figure 11: What about the best seller/recruiter in each period? The story is largely the same. There are the guys with big homes and fancy cars on the top and that is because they entered early. Nearly everybody else is going to struggle with thousands of others to make very little income. And remember, there are a lot of new faces constantly entering the market to compete with (See Figure 9). 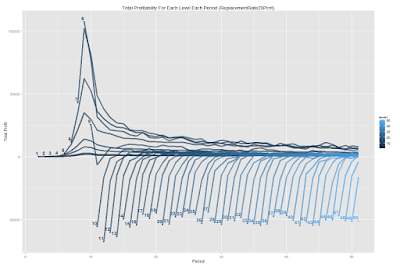 Figure 12: And this is where it becomes clear that this model is just that of a pyramid scheme. Except for a very few IBOs who enter early, the vast majority of IBOs are paying a lot of out of pocket costs and time in order to loose money overall!


Though the MLM business model is inherently and irredeemably broken, there are hundreds of MLM business out there in the world "making" billions of dollars. Searching for "multilevel marketing" on Google you will find a lot of people who say they only lost money, time, and friends by participating in MLM but they still generally believe that if you stick it out and work hard enough it could have worked. They have bought into the lie that if they were just better at selling or better at recruiting they could have been successful.

But the truth that these simulations have convinced me of is that this is not the case. Those who are going to make money from MLM have already established themselves within the organization in order to make money. Everybody else, unfortunately are the suckers who do the hard work of making sales and recruiting new suckers.

You will hear people make analogies about how some established industries such as insurance are also commission based systems and therefore just another form of MLM. However, I have interacted with many insurance agents over the years and none of them have ever tried to recruit me to be an insurance agent as well.

Going into this project, I was uncertain about how "bad" MLM was. Now, I am certain. The only way MLM models are marginally sustainable is by continually feeding new bodies into the machine. This results in early entrants making big money and everybody else loosing out.

But don't take my word for it! Play with my simulation! Tweak the parameters however you want. The only way you make the system sustainable is if you make the cost of attempting to sell or recruit equal to zero and you set the cost of membership equal to zero. Of course these assumptions do not and can not reflect the real world or any MLM model!

Thus, there is no possible way to build a model that allows late entrants to be profitable!
Posted by Francis at 10/23/2015