The Unreported War On America's Poor

The Democratic firebrand Bernie Sander's keeps harping on this point about income inequality in the United States, yet I have to wonder, how bad is it really and do we care?

First off, there is a legitimate reason to ask, if we should care. After all, throughout history, nations have gotten more wealthy with some people getting a bit more of the wealth over time yet things seem to keep going. So long as individuals feel that they can have reasonable access to opportunities for income growth and that a significant portion of the population is not living in poverty, things are okay, right?

Yes, but maybe there is a point at which income inequality can grow so vast and its influence over government so enormous that that which used to be a democracy ruled by the people becomes an oligarchy ruled by the few.

The first figure is more or less what we would expect. We can see that the top 1% has increased in earning capacity massively since the 1980s. In terms of income in contemporary dollars income seems to be increasing throughout the population.

We can see that the income being made by the top 1% has grown significantly over time. Looking at the next graph we can see that compared with the median household income this growth has been huge.
From Figure 2 we can see that the top 1% have increased in earnings significantly since the 1980s from making on average a minimum around 4 times that of the median household per year to that of minimum 10 times. The reason I say minimum is because the census does not release true earnings numbers but rather median earnings which are a lower estimate on a strongly skewed value.

But what does this all meaning for buying power and the ability individuals have to pay for living expenses and that of their families? 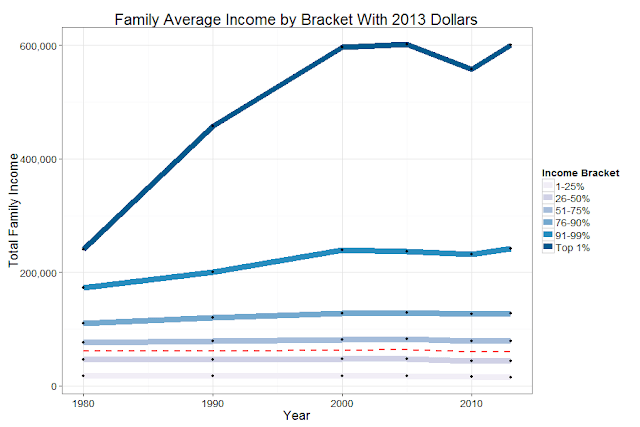 Figure 3 starts to show us that things are not necessarily as good for everybody involved as they appear in Figure 1. First off, median income seems to be holding constant. Second, though it is difficult to see, the bottom 25% of families seem to be loosing income. How significant is that loss?

Looking at Figure 4 we can see that for the poorest 25%, all age groups have experienced a dramatic reduction in total family income since the 1980s. Those 60+ are somewhat immune from the worst of these falls in income probably due to social support programs such as social security.

So is the cost of living decreasing to match the falling income?

From Figure 5 we can see that the cost of rent has significantly increased since 1980 with all age groups being hit hard. Though information is not available in the census the cost of higher education has increased a staggering 538% since 1985 while medical costs have increased 286% relative to increases in the CPI of only 121% (Source).

So how has the decrease in earning power and increase in cost of living affected vulnerability to poverty?
From Figure 6 we can see that the affect of decreased income coupled with increased costs has created a situation in which a higher proportion of the lower 25% are at risk of being classified in poverty as at any time since the 1980s. Different age groups suffer from different levels of risk though clearly minors are at the highest risk with over 70% of them being raised in poverty in 2013.

So what is the deal?

Why are America's less fortunate so much more vulnerable to poverty than before?

Are the poor giving up on school?
From Figure 7 we can see that the lowest 25% of society has higher high-school and college completion rates than at any time ever in our data.

Is it just that people are poor because they can't find employment?

From Figure 8 we can see that working 40 hours or more a week does not insulate one from poverty if you are among the bottom 50% of the poorest families. Whether you are a male or a female you are more likely to be in poverty while working full time today of any time since 1980.

Is there any way to measure the effect of poverty on the health of families and individuals within our dataset? Unfortunately the census data is surprisingly lacking any indicators mental state or that of physical or mental health. What small measure we can look at is that of marital status inferring that happy people are more likely to stay married while unhappy ones, especially those under a lot of stress are less likely to stay married.

Now it seems to be frequently argued that marriage is under attack within society in general. However, when looking at Figure 9, we can see that marriage seems to be more under attack for the poorest segments of society with the bottom 25% more than 10x more likely to be divorced or separated at the time of the survey than that of the top 1%.


Democratic presidential candidate Bernie Sanders has claimed that income inequality is leading to the rich getting richer and the poor getting poorer. Nothing in the results presented here have contradicted this claim. Since 1980 the wealthiest segments of our population have increased in income level from making on average 4 times that of the median income to that of 10 times.

At the same time, the poorest 25% of society now how less purchasing power than they did in the 1980s while the cost of rent, education, and health care have all risen. Despite having the odds stacked against them, the poorest 25% are better educated than at any time in history.  Yet, their incomes have continued to falter while their divorce rates have grown steadily higher.


We must therefore conclude that the society we live in today is less fair to the poor than it was 35 years ago despite the earnest efforts of the poor to become more educated.


The source of the data is from IPUMS-USA.

To create these graphs on your own you can find my code here. You will need to request your own data from IPUMS.
Posted by Francis at 11/18/2015