* Imagine we have a sample of hotels and prices of rooms in those hotels
clear
set obs 200
set seed 101
* This sets the random seed at 101.  Thus every time this simulation is run it will product identical results.

sum p
* There are some p values which are less than 0 but we can think of those as special deals, coupons, refunds, or other situations that might result in the effective price being less than 0 dollars.
* If we were to eliminate the less than 0 prices then we would in be enforcing left censoring which is a different problem.  See "tobit".  This blog has several posts touching on the use of the tobit.

reg p star seasonality
* The OLS regression looks pretty good.  Let's see if we can improve on it.  Note, the 95% confidence interval did not capture the true coefficient of 20 but that is not necessarily a problem. 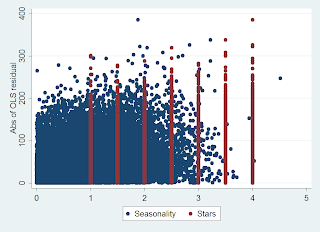 predict uhat_abs_hat, xb
* I might be doing this wrong.  I am trying aweights which say something about weighting by the inverse of the variance of the observation.)

* Using the MLE estimator we seem to have gained precision in the 3rd decimal place of the coefficients.  The 95% CI still does not enclose the 20 but it is closer.  Still, this is not indicative of a problem.  Perhaps if we simulated this 1000 times and substantially more than 50 times the CI did not enclose the 20 then we might be worried.
Posted by Francis at 8/16/2012