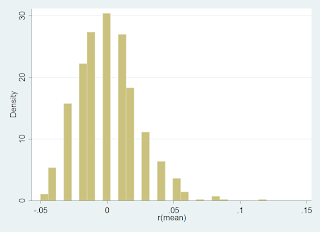 * Already things are beginning to look a lot more like a normal distribution.  Obviously it is not normal because the potential outcomes are discrete. 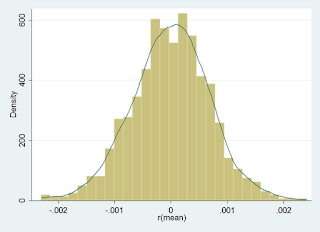 * Now things are looking very close to normal.  Of course there will be some randomness in the 1000 draws which have enough inherent variation to make even a normal variable look non-normal.

* So using a x variable with are bernoulli(.05) leads to a convergence in means that looks normal not until around 100,000 draws.  This might sound bad but it really is not.

* In addition, a bernoulli(.05) is an extreme distribution with a large skew and discrete outcomes.  Most distributions, even binary and count distributions are going to have properties which are more similar to a normal distribution causing more rapid convergence on normality.