* This method only approximates joint non-normal draws (which is really what any method does).

* I was recently told that it was "impossible" to draw joint non-normal distributions.

* But you will see that the approximation looks pretty good.

* First we will specify the correlation matrix.
* The only constraint as far as I know is that the covariance matrix has to be PSD.
* This in practicality limits the possible correlations between variables since cross terms tend to cause vialations more likely in the PSD requirement.

* If we do not specify a mean or covariance matrix then the default draws are standard normals which is what we want for simplicity.
drawnorm x1 x2 x3 x4, corr(c)

* Now all we need to do is turn our normal draws into uniform draws.
* Note: if x~N(0,1) and THETA is the CDF of the normal then y=CDF(x)~uniform
* So for any new distribution with CDF ALPHA and inverse INVALPHA the variable z=INVALPHA(y) ~ alpha.

sum
* Looking good.  The next step is that we take the inverse CDF of the distributions of interest.

gen z1 = invchi2(5, y1)
label var z1 "chi2"
* The inverse poisson distribution seems to be incorrectly defined in Stata so that it uses 1-p rather than p to calucalate the inverse.
gen z2 = invpoisson(5, 1-y2)
label var z2 "Poisson"
* It is easy to transform a uniform (0,1) to (a,b) by subtracting a and multiplying by (b-a)
gen z3 = y3*10-5
label var z3 "Uniform"
gen z4 = invF(5, 5, y4)
label var z4 "F distribution"
corr z?
spearman z?
* We can see that the spearman rank correlation is maintained with the standard pearson correlations are only slightly diminished by the non-linear transformations.

* In general the correlations are slightly drawn towards zero so if possible it might be worth it to exagerate the correlations in the matrix c so that they end up being drawn more closely to the desired levels. 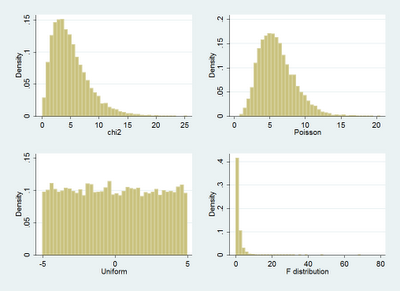