# I know very little about Baysian methods and this post will probably not reveal much information information.  However, it should hopefully lead to many more fruitful posts in the future. 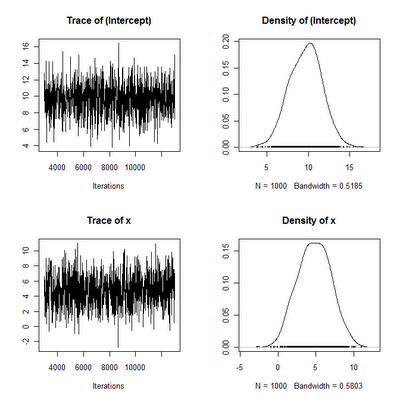 # This will give the estimates of the coefficients that we are typically looking for.
posterior.mode(mc$Sol)

# The 95% confidence interval of the MCMC estimates can be found:
HPDinterval(mc$Sol, 0.95)

summary(lm(y~x,data=d))
# We can see that the standard linear model fails to reject the null for the coefficient on x even though it is large.

# To read a small tutorial on the use of MCMC written by the package's author J.D. Hatfield
# http://cran.uvigo.es/web/packages/MCMCglmm/vignettes/Tutorial.pdf