* I recently went to an interesting seminar today by Matias Cattaneo from the University of Michigan.

* He was presenting some of his work on non-parametric regression discontinuity design which I found interesting.

* Regression discontinuity is a technique which allows identification of a localized effect around a natural or structured policy discontinuity.

* For instance, if you wondering what the effect federal grants have on college attendance, then you may be concerned that just looking at those students who are eligible for federal grants in contrast with those who are not eligible will be problematic because students who are eligible (low income) may different than those who are not eligible for the grant (not low income).

* This may occur if for instance the income cut-off for the grant is unknown.

* So even if students are systematically under-reporting their income, they are not doing it aware of the actual cut off, so the students sufficiently close, above and below the cut off are arguably the "same" or drawn from the same pool except that one group received the program and another group did not.

* The previous post deals some with assuming a linear structure of the underlying characteristics.

* However, the more interesting case (potentially) may be when we assume a nonlinear response to the income in our dependent variable.

* But before going there let's think about what this method boils down to.

* Like all identification methods in statistics or econometrics when we do not have experimental data, identification of an effect is driven by some exogeneity argument.

* That is, x causes y and is unrelated to u (the error).  In the case when u may be correlated with the error the use an exogenous variable to force the movement in the variable of interest may be sufficient to identify a causal effect.

* In this case, clearly it is not enough to simply see what the average y response (GPA, attendance, graduation rates, whatever) is to a change in grant level because those who receive the grants are systematically different from those who do not.

* However, because the cut off for receiving the grant is unknown, around the cut off the two samples who receive the grant and who do not can arguably be considered the same.

* Let's imagine some non-parametric relationship between income and performance: 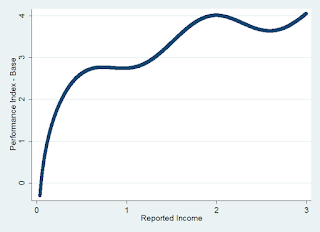 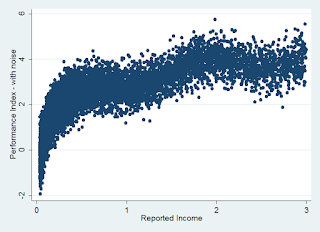 * Using the user written command rcspline, we can see the local average performance as a function of income. 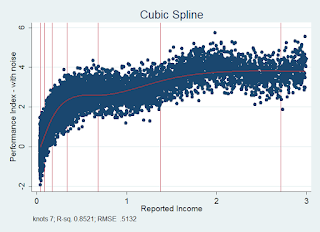 * The spline seems to fit the generated data well.

* So about 50% of our sample is eligible for the grant. 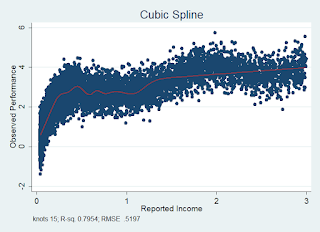 * However, we can see that there does appear to be "something" going on.

reg perf2 income grant
* We can see that our itial estimate of the effect of the grant is entirely wrong.

* It appears so far that the effect of the grant on performance is actually hindering performance (which we know is false).

* Though this estimate is negative and thus seems the reverse of what we would expect, it is actually working quite well.

* In this case however, the discontinuity is really driving the grant to be equal to zero.

* Thus we must inverse the sign on the rd estimator in order to identify the true effect in this case.

* rdrobust is a newly designed command that has some extra bells and whistles that other regression discontinuity commands have as well as some oddities.

* This command is nice because it estimates many bandwidths through the mbw option.

* We can plot our estimates of the treatment effect using a range of bandwidths. 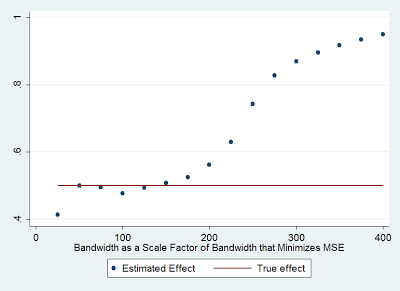 * We can see around the 100% MSE bandwidth estimates are fairly steady though they dip a tiny bit.
Posted by Francis at 2/11/2013