* Often times we are interested in estimating the effect of a binary endogenous regressor on a binary outcome variable.

* It is not obvious how to simulate data that will fit the criteria specifications that we desire.

* With u and v distributed normally and independently of x, w, and z.

* We know this setup is generally not correct if either y is binary or w is binary .

* When y is binary we might choose to use a MLE probit estimator with the following assumptions:

* However, it is not easy to generate data in this form.

* Instead we will generate data introducing endogeneity by use of an unobserved addative error.

* The above equation should not be expected to estimate a coefficient of 1.25 on the z variable.
* This is because of the addative error term v which contributes to the implicit error of the normal CDF to create an error with a total variance of 1 + 1 = 2
* Thus, when the probit estimator is run it automatically scales the equation to be unit.
* We can discover consistent estimator by rescaling the coefficient on z to the true standard deviation.
di -.5/(2^.5)  " for the constant"
di 1.25/(2^.5) " for the coefficient on z"

probit w z
* Pretty close estimates to what we expect.

* First let's see what happens if we neglect to make any effort at controlling for the endogeneity.
probit y w x1

* Our estimate of the coefficient on w is way too small

* In order to estimate our relationship in a consistent manner we will use the biprobit command.
* This command effectively estimates two separate probit regressions with the allowance that the unobserved outcomes be correlated with the parameter /athrho.
* In this case, the unobserved component from the w estimation equation is the endogenous component from the y estimation equation.
* Since, w only is entering y linearly it is sufficient that the unobserved portion of w correlated with y is in a sense controlled for through the joint probit regression.
biprobit (y = w x1) (w=z x1)
test w= `w_est'

* We can test the "endogeneity" of w by testing the significance of /athrho.  Which appears in this case to be quite significant.

* Not bad, we fail to reject there being any difference between our estimate of the coefficient on w and the true.

* What do we do if there are multiple endogenous binary variables?

* The majority of estimates are not working well.

* Previously the biprobit was sufficient.  However, biprobit only allow for a two-way probit.

* Fortunately, there is a user written command that uses simulation to approximate a multivariate probit.

* The syntax of mvprobit is very similar to that of biprobit

* Unfortunately the estimates are still too far away from the true.

* However, they are closer. 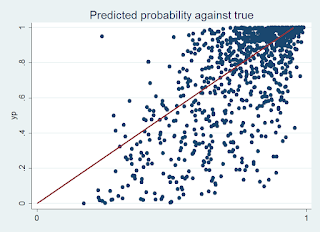 * What happens when one of the endogenous variables is continuous?