flattr as an open-source financing solution

Dear readers, many of you are probably wondering what the flattr button is that has appeared on my blog.  I think I have some reasonable arguments for why flattr is a great idea.

First off let’s look at what flattr does.  From superficial description flattr could be easily confused with many traditional forms of non-centralized donation based fundraising operations.  However, flattr rather than asking for money asks for “flattrs” which are used to distribute funds in a monthly payment system.  Thus the flattrer is paying a fixed amount monthly which is redistributed evenly throughout the recipients of the flattrs. 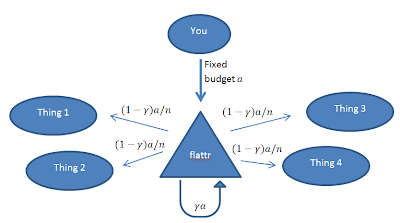 In this case you choose a and n, a being the amount you give monthly and n being the number of projects that you give to.  gamma is the reasonable fixed value of .1 which flattr takes as commission for providing the service.  Thus if you choose to give $10 a month and choose four flattr “things” which is a general term meant to include anything from software developments, music productions, to blogs.  Thus you would be effectively giving $9/4 which is $2.25 to each of your "things", from now on I will call them projects.

For the individual:
From an individual perspective I think this choice pattern could be optimal for a number of reasons.  For one it reduces transaction costs.  It reduces the time involved in making many small or large donations which might involve inputting credit card information and unpleasant follow ups by organizations.  This transaction cost I believe can be quite burdensome.  Imagine if you would like to sponsor 100 organizations with a total of $200 over a year.  Using traditional methods assuming it takes 10 minutes to sponsor each organization we are talking about 33 hours spent just trying to pay the organizations.  Additionally, organizations might not find it worth the time to handle such small transactions.  Flattr make these kinds of transactions very possible and efficient.

Flattr circumvents that Kantian Categorical Imperative logic which argues, “if you are giving to this person or organization why aren’t you giving to all organizations?”  This question leads you naturally to a scenario where you would be giving too much money to be fiscally sound or the size of the donations are so small as to make transaction costs larger than the payments.  However, using flattr, there is no penalty for increasing the number of projects you are giving to which can be independently modified without changing the amount you are giving.

As an alternative to advertisements:
For media production organizations Flattr provides an alternative to advertisements.  I know some economists argue that advertisements provide signaling information to consumers about the quality of their product and that information has some value to the consumer.  I think there is some validity in this argument however I believe the cost of providing advertisement information to the consumer in almost all scenarios vastly outweighs the marginal benefit of that information to consumers.  Also, that quality is not always signaled but rather other primal impulses are triggered such greed, lust, and gluttony which do not enrich the human experience in general.  In addition, the direct amount of time and energy that advertisements absorb is huge and costly.  For an obvious example, when watching tv, about 1/3 of time spent is watching commercials.  Yet the benefit to the television station for you using up 20 minutes for each hour of your time watching junk advertisements is probably only a few cents.  Yet they do it because it is the only way to extract payment from the user.

Though I have been getting a fair bit of traffic on this blog, I have refused to post any advertisements because of the high cost to users that these advertisements would impose.  Yet, I would like to have some reasonable amount of revenue that I can use to turn around and invest in other projects that I am interested in starting such as a project to develop a free interactive learning environment for students.  I think Flattr provides a reasonable system to raise funds from interested micro-donors.

The decentralization of information
The Economist Friedrich Hayek made quite a splash with his seminal paper “The use of knowledge in society”, 1945.  In the paper he argued that a decentralized system for organizing information largely through use of price mechanisms can be far more effective at efficiently allocating resources than a centralized system.  This paper was a direct affront to communist arguments pushing the efficiencies of centralized control and large scale production.  As it turned out, with the fall of the Soviet Union he was shown extremely right.

However, price systems have not shown to be uniformly effective on all scales in all markets.  Some markets such as media production, book publishing, and reporting have resisted decentralization.  Yes, in most industrialized nations there is some separation between these industries and the government, yet these industries all have natural economies of scale which makes them prone to forming natural monopolies.  For instance, you can be a reporter looking into US military misconduct yet if you want to publish anything you need to go through one of the big publishing organizations which might very well reject your article out of self-preservation.  Looking at the destruction rained down on wikileaks, it is clear that censorship is very alive in the world.  Flattry might present a mechanism for small specialized production organizations to develop projects which would be too controversial for established organizations to participate in.

As funding for open-source development
Finally, I think that flattr has the most potential as a source for the funding of open-source project such as R which year after year must compete with highly funded and well-advertised commercial ventures such as Stata, SAS, SPSS, etc.  R for example is one of the most effective open source collaborations ever established.  It has literally tens of thousands of packages that do any number of operations.  It is also extremely powerful in giving the user near complete control of the objects in the environment.

Yet little of that popularity translates into traditional funding resources which could be used to maintain or expand availability of the software (such as maintaining software repositories or promote the software to new users).  This results in far too many users using extremely expensive proprietary software instead of R which I believe is generally also expensive and inferior outcomes.  Fortunately, R has many university level applications such that universities around the world have established R repositories which host R storage.  Even so, if R users gave a dollar or two a month to advertising and development then I think the user base could be rapidly expanded.
Posted by Francis at 4/07/2013