# I have been reading the Moral Animal by Robert Wright and it has gotten me interested in putting together a simulation which is modeled after the classic Robert Axelrod's tournament style influential simulations.  So here it is!  Hope you enjoy it.

# You can also find a link to the code in full here.

# I would like to simulate multi-agent a micro-economy in which agents perform the prisoner's dimemma repeatedly.

# Games like this have been important as evidence for an evolutionary psychological explanation of social cooperation.

# you cheat but opponent cooperates
cheat.coop = 2

# You cooperate but opponent cheats
coop.cheat = -2

# Number of agents. This number must be even to ensure every agent is matched.
n.agents = 20

# Basic framework.
# Each round agents meet other agents.
# Each agent has access to knowledge of the other agents previous behavior (either cheat or cooperate)

# Let's define the types of agents.
# Agents get fed input h which is the list of prior history with other agent.
# The argument they return is their action. 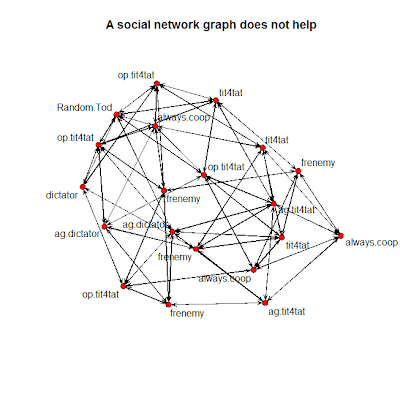 # A better graph might be one that shows how different agents performed over time.
score.cum = apply(scores.round, 2, cumsum) 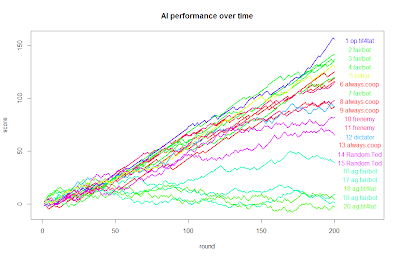 # Each time you run the simulation you get different results depending upon the random draws and the agents in the pool.  Experiment with what happens as the size of the pool increases.  Cooperative strategies loose out to aggressive strategies.

# We can see that up to between round 50-80 all of the bots perform equally since they do not have any history on each other.

# Notice that the opportunistic tit4tat seems to perform the best frequently.  This is kind of unfair since this bot is using meta-game data.  That is, it knows the game is nearly ended so it starts cheating like crazy because there is probably not time for future reprisals.
Posted by Francis at 4/09/2013