* A frequent assumption in economics is that the coefficient that is being estimated is constant throughout the population.
* That is, the effect of the exogenous variable is the same for all individuals.
* This assumption is implicit in the notation:

* Y = XB + u
* Because B is assumed to be constant for all individuals.
* However, let's for one second imagine that we are not estimating the constant B, but rather a random variable b.
* Thus: Y = Xb + u

* This immediately presents an obvious problem.

* What do we want to know from this formulation?
* One problem is that for however many observations we have, we have the same number of bs, thus we cannot hope to estimate the individual b values.

* Where most people have taken this model is to say we are interested in two primary things:
* 1. What is the average effect of X on Y?  Ie. E(dY/dx|X) which is really what we are after assuming constant coefficient.
* 2. And how much variance exists in b?

* To think about this the following formulation is useful:
* b = B + v
* Where B is the average cofficient and v is the random component.

* Now to insert this into the estimation equation:

* However, OLS is no longer the most efficient estimator of B any longer (because the homoskedasticity assumption is violated). 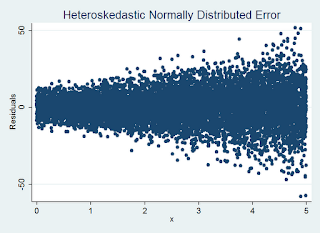 * So, we would like to do both 1 and 2 above.
* We would like to estimate not only the average effect of x on y (what we can accomplish with OLS),
* but also the variance of the error terms which is u and which is v.


* In order to do that we will first define the NormalReg.
* That is the regression MLE form assuming the errors are normally distributed.

* The first argument of any maximum likelihood program is the name of the temporary log likelihood variable created by the stata when the ml procedure is called.
* Each additional argument is an linear "equation" that Stata maximizes by choosing estimators for.
args lnlk xb sigma2
* Thus we have two equations that we are asking Stata to solve.

* The following is the log likelihood value that we would like Stata to maximize.
* In this case it is the log of the normal density asking Stata to choose the optimal mean and standard deviation.
qui replace `lnlk' = -ln(sqrt(`sigma2') * sqrt(2*_pi)) - ($ML_y-`xb')^2/(2*`sigma2')
* I have opted to program the pdf of the normal in the equation rather than the build in normal pdf command.

* The first thing you are probably wondering is "why am I using a model that only has one error term when I really want to learn about two error terms?"

* The answer is that, as seen above, the sum of the error v and u can be expressed in a single form e.

* This conviently is a linear form that can easily be included in the above equation.

* In order for the MLE estimator to be efficient in this case we are assuming that both v and u are normally distributed (which they are because we generated them).
* We may also be concerned that the generated covariance maxtrix Chat is not Positive Semi-Definite, a requirement for v and u to be jointly multivariate normally distributed.

* We can check this by attempting to take the inverse:
matrix INVA = inv(Chat)
matrix list INVA

* In this case there was not problem inverting Chat.  But this need not be the case.

* Let's try simulating some outcomes for a matrix a hairs breathe away from not being PSD.

* This could present a problem.
* There are various ways of trying to correct for this.
* All of them require more advanced programming than I currently understand using the MLE syntax.
* I hope/need to learn how to make such corrections in the near future.

* Note, Stata is already doing some clever behind the scenes manipulations to make sure only feasible values of the parameters are chosen.

* Stata must ensure that sigma >= 0 for the psd (because it is taking the square root).

* The first argument of any maximum likelihood program is the name of the temporary log likelihood variable created by the stata when the ml procedure is called.
* Each additional argument is an linear "equation" that Stata maximizes by choosing estimators for.
args lnlk xb var_u var_v cov_uv

ml model lf myNormalReg2 (y = x) (var_u: ) (var_v: x2, noconstant) (cov_uv: x, noconstant)
ml maximize
*  Note that because I was able to specify simga directly I have already multiplied by the constant 2 causing the cov estimate to be scaled properly.

* This new specification is guaranteed not to create covariance matrices that are not positive definite.
* However, it frequently fails to converge which means that it is really not a very good algorithm.
* I will continue to experiment with this problem in the near future.

* This next step is using a Cholesky Decomposition to pre-specify the variance matrix (as suggested by my advisor Jeff Wooldridge).

* I will post more on that as I make steps forward.

* Also, if anybody knows any built in commands in Stata that can do this, please post them.

* I have used xtmixed previously to identify random coefficients.

* However, I think the command imposes orthogonality on the random coefficients.
Posted by Francis at 11/09/2012