* Stata has a wonderfully effective simulate function that allows users to easily simulate data and analysis in a very rapid fashion.

* The only drawback is that when you run it, it will replace the data in memory with the simulated data automatically.

* Which is not a big problem if you stick a preserve in front of your simulate command.

* However, you may want to run sequential simulates and keep the data form all of the simulations together rather than only temporarily accessed.

* Fortunately we can accomplished this task by writing a small program.

* Gettoken will split the arguments fed into msim into those before colon and those after.
gettoken before after : 0 , parse(":")

* Now what I propose is that the argument in `before' is used as an extension for names of variables created by the simulate command.

* Now we run the simulation which wipes out the current data.
`simulation'

* Now we need to generate the ID to merge into

merge 1:1 id using `tempsave'
* Get rid of the _merge variable generated from the above command.
drop _merge
end


* Let's write a nice little program that we would like to simulate.
cap program drop simCLT
program define simCLT

* So let's see first how the simulate command works initially 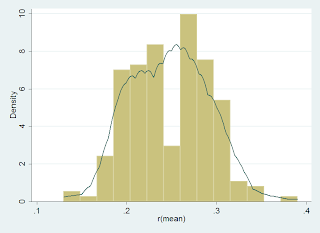 hist mean, kden
* The mean is looking good but not normal

* Now normally what we need to do would be to run simulate again with a different argument.

sum mean*
* We can see that the standard deviations are getting smaller with a larger sample size. 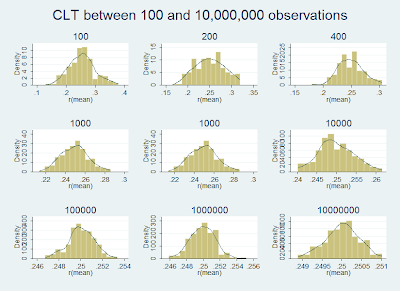 * We can see that the distribution of means approximates the normal distribution as the number of draws in each sample gets large.

* This is one of the fundamental findings of statistics and pretty awesome if you think about it.