* This post explores the setting of initial values with the ML command.

* There are several reasons you may be interested in doing this.

* 1. You are having difficulty with your data converging and you think that
*        you are having a problem with your initial values being unfeasible.
* 2. You may believe that you might already have reasonable estimates and
*        therefore you believe you might gain efficiency by plugging in those
*        initial values.
* 3. You are interested in using Stata's approximation algorithm to compute
*        standard errors. 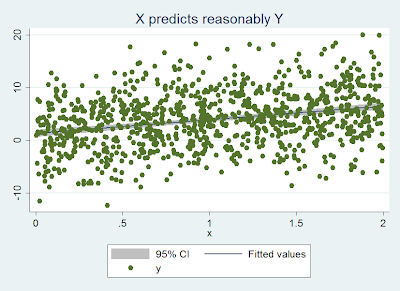 * Let's say we are interested in estimating the three parameters in our data.
* coefficient on x and the constant as well as the variances of the error (25)
* We can use the maximum likelihood function myNormalReg to solve this problem
* simultaneously.

* This is our benchmark.

* We also know that OLS is equivalent to the above MLE except it does not directly estimate sigma
*    though it does give a more precise estimate of the coefficients.
reg y x

* Unfortunately, perhaps this simple setup is too easy to solve.
* There is no noticable difference in convergence rates using the OLS estimates as starting values.

* The results are pretty much the same as above.