* After using the msim command from a previous post, I decided I did not like having many different variables for each simulation run.

* So I have recoded an alternative command called asim

* This command allow subsequent simulate commands to be run, saving the old data in memory appended to the current data.
cap program drop asim
program define asim
* This will allow the user to specify a value to assign to the asim variable which is generated after the simulation is run.
gettoken before after : 0 , parse(":")
local simulation = subinstr("`after'", ":", "", 1)

* This will append in the new simulation data to the old data set.
gen asim = "`before'"
cap append using `tempsave'
end


* Let's write a nice little program that we would like to simulate.
cap program drop simCLT
program define simCLT

* Let's say we would like to see how many observations we need for the central limit theorem (CLT) to hold for a bernoulli distribution.
gen x = rbinomial(1,.25)

* So let's see first how the simulate command works initially.

hist std_mean, kden by(asim)
* We can see that this generate data is much easier to use than that using many different variables. 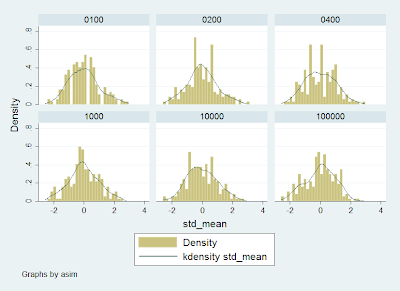 * It looks a little funny with some of the numbers having zeros in front.  However, this was the best way to do it given that the asim variable is text.