Selection Bias in the use of Fertilizer

* This simulation follows the inherent logic behind the following paper:

* We might think that the use of fertilizer might be a no-brainer given the results of experiments done in other countries with different types of soils, water input, climate inputs, but that the return to fertilizer might actually be much lower than we expect for many farmers in poor nations and that is why they are not purchasing and using more fertilizer. 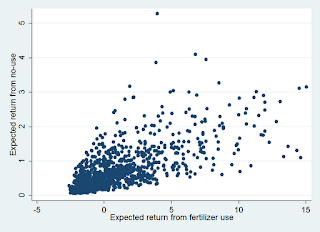 * Where random spatial variation in productivity is:
gen sigma = abs(rnormal())+.2

* Each farmer has some unobserved additional return from using fertilizer:
gen alpha = 6*runiform()

* If fertilizer were free than everybody would always use fertilizer.

* If however it costs something then some people will choose not to use fertilizer.

* Farmers will decide between choosing to use fertilizer or not based on expected yeilds:

sum fert
* We can see that there is only modest adoption of fertilizer under these parameters.

reg yeild fert
* Even though clearly the use of fertilizer is correlated with higher total yeild.

* Thus the choice of using or not using fertilizer can be easily explained through a rational choice framework.

* If this is the true underlying scenario then their is no efficiency arguments for states, NGOs, or multinations for intervening through the supply or subsidization of fertilizer.

* However, this might not be the whole story.  Imagine the case where producers might be risk averse.

* So that they value different returns based on their personal preferences rather than their monetary value.

* Imagine the case where if a farmer were to get a return of less than gamma then that farmer would run the risk of dieing or having his family die so the farmer will be highly adverse to that scenario.

* The expected value of production with fertilizer is still Y1 but now there are two other potential levels of production:

* However, there is variable returns from using fertilizer so:

sum yeild*
sum fert*
* Thus we can see that though the expected value of using fertilizer at a higher rate might lead to net gains in expected production, farmers might choose not to because they find the range of returns from fertilizer use too risky.

reg yeild2 fert2
* So only the farmers who know that even in the worse case scenario they are going to have enough to survive end up using fertilizer.
* These farmers are also the farmers that have the most to gain from using fertilizer, thus it looks extremely effective.

reg fert2 alpha Pf Py
* Interestingly we can see that under risk aversion, the different parameters entering into production are less effective at predicting the choice of using fertilizer or not.

* I think this is caused by the extreme flatness found in the use of fertilizer when there is a substantial risk of crop failure.
Posted by Francis at 6/27/2012