* For instance imagine Y=exp(XB) and we want to estimate the Bs directly.

* Any data from memory
clear

* Or we can transform y
gen lny=ln(y)

* Notice that the non-linear least squares estimate is pretty bad.

* This is because the E(u)!=0, that is because E(normal())>0 and that by random error being enclosed in the exponential it means that the error is multiplicative.

* The problem with a simulation like this is that we can estimate B without needing to use non-linear least squares.

* An equation that cannot be decomposed into closed form.

* These coefficients are not right (b0 or b1), but then again maybe they are because the sign function is symmetric and repetitive. 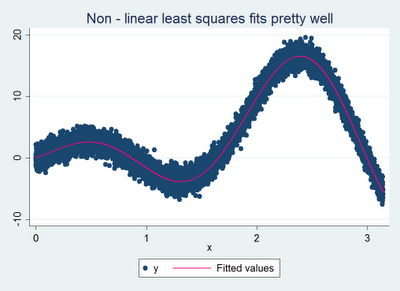 * Of course this example is also very contrived.

* Let's test how well the estimate performs when there is more noise in the model.

* Now let's see what happens if we do not know the functional form as well:

* and we want to fit a polynomial to it. 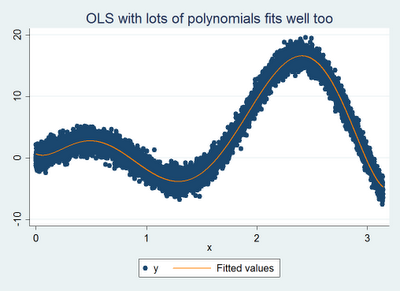 * But does a good fit imply a good forecast?

* Let's imagine that the true distribution of x is truncated normal runiform()*_pi*1.1 and we only observed runiform()*_pi portion of it.

* If we are using x to predict y in both these scenarios we will come to two ver different conclusions in our predictions.

* Imagine that we have 500 more new observations:

cap predict y_poly_new
* This did not generate y_hat for all of the values.

* Despite both models having very similar r2, the correctly specified one is much better at forcasting. 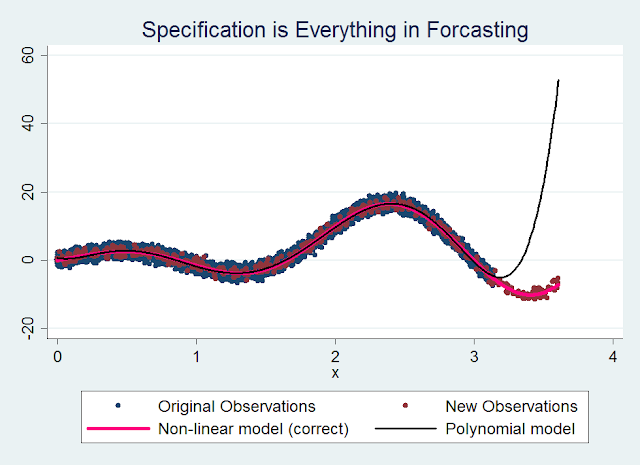 * Of course the difficulty of discovering the underlying structural model is another matter :)

* Thus every so often you hear about a group of financial wizards who are able to "predict" the stock market for a few time periods but then something changes and the models that looked so good to begin with end up generating lots of trash.