* Stata's predict command is an extremely useful command for many purposes.

* In this post we will go through how it works.  And manually program in long hand some of the things it does.

* What most estimations do is they take the Y and the xs and estimate some variant of f.

* Most estimation commands attempt to estimate b0, b1, and b2.  Which is great!

* "How does u look? Does it look normal, thus justifying the use of OLS?"

* We may also ask, "How does the estimated y look?  This is often not particularly interesting since it is purely linear but often 'yhat' the predicted y is used in post estimation techniques."

* Let's see how this works.

* This is equivalent in the OLS case to:
predict yhat2, xb

* Likewise we may be interested in the error uhat

sum uhat?
* There is the slightest difference between uhat1 and uhat2 but this is only the result of rounding error.

* Now that we have uhat, we can map it out to see if it looks like it is behaving well:

hist uhat1, kden
* Unsprisingly (given that we drew u from normal) uhat1 (which is an estimate of u) looks normal as well. 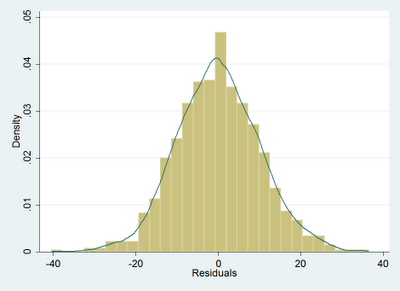