# Spatial data tags are an increasingly recorded for data that is being generating as a result of widescale implementation of GPS technology.

# In this post I will present a simulation in which the population is distributed around a single town center.

# The important characteristic of the population is that their characteristics are autocorrelated.  This can either be in response values or in error terms.

# Specify the location in which the population is centered

# Dispersion, the average distance of an individual from the center

# First off.  We would like our population to be distributed in a circle around the center.  So we need to pick an angle in radians.

# This is the distance from the center that each member of the population will be.  If this were set to a constant then the following commands would end up drawing a circle.
distance <- rnorm(population)*dispersion.km 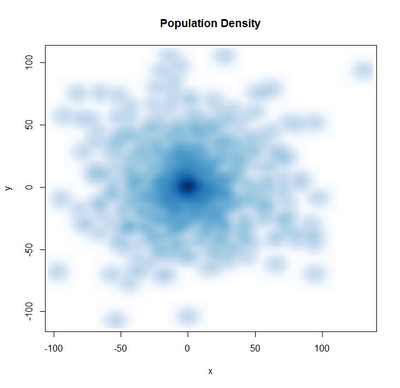 # Let's imagine that there is an unobserved variable called "soil quality" which varies in both the x and y.

# Farm size is random. But on average smaller as the plots get closer to the city center.

# In order to produce some cool graphs we will need to install a new package:
install.packages("ggplot2")
library(ggplot2) 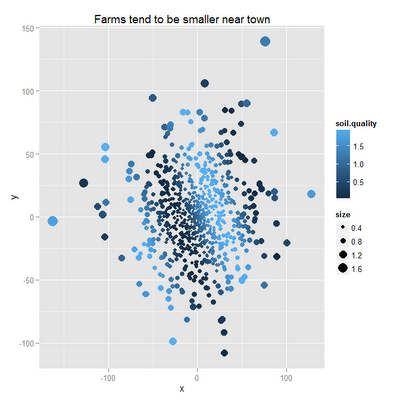 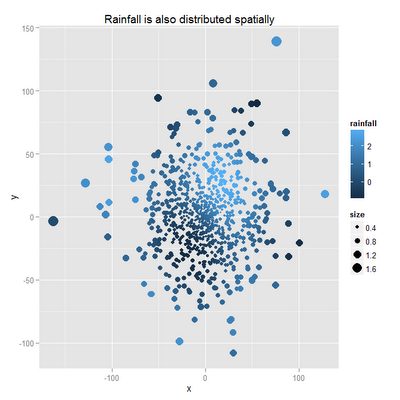 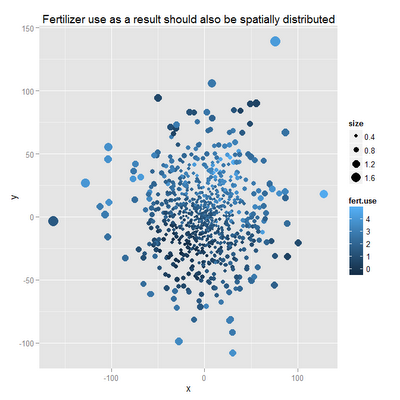 # Now let's see if we can't test if we can if fertilizer use is spatially correlated.

# The trick is figuring out what that means.

# So I need to figure out a way of finding out what the closest person fertilizer usage is.

for (i in 1:population) {
# We will look at each person i and find the person which is closest.
# First let us constuct a variable that measures distance.
# This is that standard Euclidean distance formula.
distance.from.i = ((mydata$x[i]-mydata$x)^2 + (mydata$y[i]-mydata$y)^2)^.5

# The following set of nested statements can be somewhat confusing.  Read from the inside statement first.
# rank() will create a vector of length population that ranks distance from i.
# Outside of that is a logical operator that will create a vector of length population which is all False except from rank == 2 which is true which means that mydata$fert will be drawn from that single value of rank==2.
# Finally we assign it to the ith place in the neighbor.fert.use vector.
neighbor.fert.use[i]<- mydata$fert.use[rank(distance.from.i, ties.method="random")==2]
neighbor.x[i]<- mydata$x[rank(distance.from.i, ties.method="random")==2]
neighbor.y[i]<- mydata$y[rank(distance.from.i, ties.method="random")==2]
} 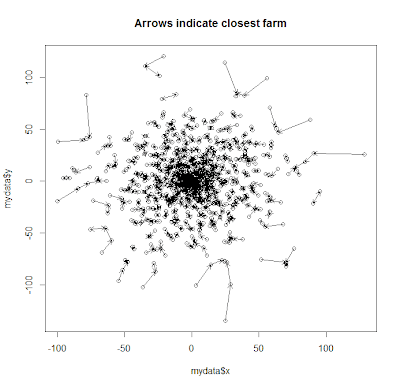 # From the plot we can see that the farm matching algorithm specified above appears to be working well.  We can see from that plot that every farm has a farm that is closest to it however there is some farms that are not the closest farm to any other farm (which makes sense).

cor(neighbor.fert.use, mydata$fert.use)
# From the correlation between fertilizer uses between each farm and it's closest neighbor I get a correlation of around .4
# This indicates that fertilizer use is spatially correlated.  However, as a result of how we set up the model this correlation is rather simple to handle.  It is not because a neighbor uses fertilizer that a farmer will use fertilizer but rather the effect of unobservables which is driving the use of fertilizer.  Mainly rainfall variation and soil quality variation.

# Imagine that we observe rainfall but not soil quality.  Let's see how well we can predict fertilizer usage.

# first let's remember how fertilizer use is calculated:
# mydata$fert.use = mydata$rainfall-mydata$soil.quality+mydata$size+rnorm(population) + 4

summary(lm(fert.use~rainfall+size,data=mydata))
# We can see that the coefficient on rainfall is too small.  This is because within the construction of this sample rainfall is correlated with soil quality.
cor(mydata$rainfall,mydata$soil.quality)

# Let's try to include technology choice of closest farm neihbor as a proxy for the spatial correlation of soil quality.
summary(lm(fert.use~rainfall+size+neighbor.fert.use,data=mydata))

# We can see that the coefficient on rainfall is even smaller.  This indicates that controlling for the neighbors choice is not helping.  Why is that?