* My field exam is coming up and I am therefore giving some thought to commodity demand once again.

* This simulation will follow the Paper "Demand Structure for Fish" Asche, Bjorndal, and Gordan SNF Working Paper No. 37/05

* In this simulation I will attempt to simulate commodity data that fits several empirical model specifications.

* A common initial attempt at estimating demand was to specify:

* The advantage of this formation was that it allowed the elasticities to be easily recovered.

* If consumers of fish have a fixed budget for fish and no strong substitutes then we expect that the price elasticity of fish to be around -1.

* Let's see if we can generate aggrogate data that looks like this.

* There was a scare that commercial fishing was killing dolphins.  Let's say that happened at time 500.
gen dolphin = 0
replace dolphin = 1 if t>500

* Let's imagine that the fishing industry is also campainging to encourage the consumption of fish.
gen fishad = rnbinomial(10,.1)

* I won't even bother estimating this. The reason is that by construction our data perfectly fits our OLS model.

* We can see all of our estimates work exceedingly well when the model is perfectly specified.

* However, it might be instructive to look at the relationships between variables. 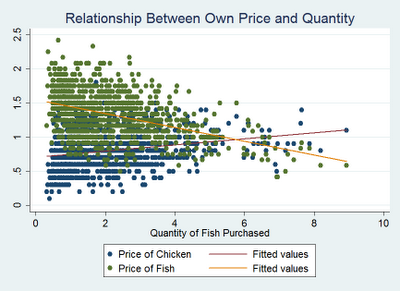 * This graph is a little bit busy and might be hard to read.
* Notice that each point in blue is also represented in green.
* This is because while the horizontal axis is the same the vertical axis changes from price of chicken to price of fish.

* It is interesting to note that while the estimates when the functional form is not speficied correctly are not as good as previously they still seem to be working well.

* Let's try converting some of them to point elasticities and see how they compare.

* Some of the point elasticities are better estimates of the constant elasticity than just the coefficients but not consistently so.

* Okay, so this has gotten our feet a little wet with the idea of estimating demand.
* Now, let's shift into demand estimation given a more flexible forms for the demand to take.

* The difference between this model and the last is that now we have a form of temporal dependence. 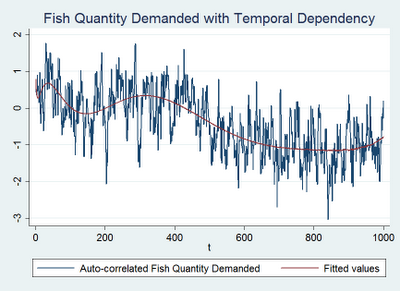 * We can see long term movement in quantity demanded as a result of the dophin scare in additition to some short term temporal dependency as a result of habit formation.
gen lnqfish2_l = lnqfish2[_n-1]

* As before, when our model is correctly specified we have little difficulty estimating the parameters.

* If we fail to include the once lagged fish quantity:
reg lnqfish2 lnpbeef lnpchicken lnppork lnpfish dolphin lnfishad
* We have less explanatory power, but generally almost all of the estimates are identical.

twoway (scatter resid lnqfish2) (lfit  resid lnqfish2)
* There is a clear relationship between the y variable and the residual suggesting autocorrelation. 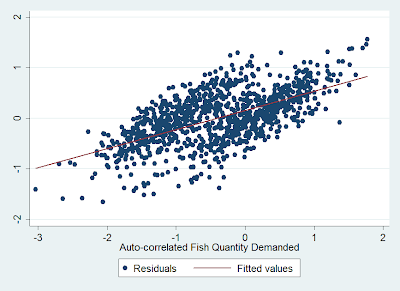 * Even though there is autocorrelation of the errors this does not substantially affect the estimates of the demand function.

* However, this is somewhat an artifact of the simulation.

* We should think that there might be a causal relationship between amount of fish demanded during the previous period and current period prices if there exists some friction in the fish markets.

* Thus perhaps the higher the quantity demanded in the current period the higher the price is expected to be during the next period because of fish reserves.

* This demands a more complex simulation in which we calculate each period individually.

* For the first period we assume prices are exogenous.

* However, high quantity demanded last period will also cause the price to be higher this period. 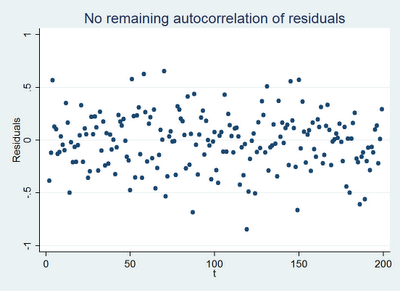 reg res3_1 res3
* After controlling for AR1 errors, there is no longer autocorrelation of residuals.