Inverting a Binomial Distribution in Stata - harder than it sounds

* I was recently trying to figure out how to invert the CDF of a binomial distribution in Stata and realized that there is not built in command.  There is an invbinomial command but it is inverting a different value than I expect.

* I might be confused but this is not the definition that I think of as an inverse CDF.

* The standard CDF can be calculated as follows from the pdf:
gen cdf=sum(pdf)

* Instead the CDF seems to be giving us invCDF(P,k)=theta, which is certaily useful for some purposes but not what I want.

* So, I will attempt to write my own CDFinverse.  I don't know how to write functions in Stata so instead I will write a small program that may do what I want.

* Let's define the arguments of the program.
* N is the total number of trials.
* P is the CDF value that we would like inverted
* p is the probability of one outcome being a success.
* newvar is the name of the new variable to be generated.
args newvar P N p

* The challenging thing about trying to invert a CDF for a count distribution is that the CDF is a probability mass function with discontinuous regions.
* However, the particularly nice thing about the binomial distribution is the the pool of outcomes is well defined. (1,2,3..N)
* Thus we can simply count how many times the "steps" of the CDF fall below the target CDF level.
cap drop `newvar'
qui gen `newvar'=0
label var `newvar' "Inverse CDF of binomial"

* Using the first cdf generated by the summing of the pdf, this command seems to be working pretty well.
CDFinv cdfinv cdf 10 .5
sum cdfinv

* Though I am not sure why it jumps from 1 to 3.  I suspect this is the result of rounding error.

cor P P2
* Close but not perfect.  Let's look at the differences graphically 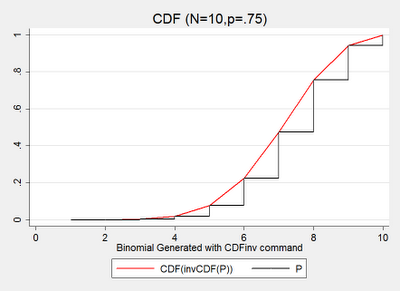 * Okay, this is does not look not bad. 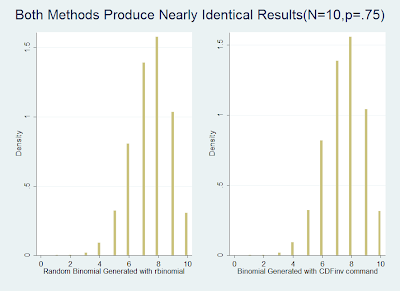