* Heteroskedasticity is a term most frequently used in economics to refer to errors which have variances that vary in some functional way with observable characteristics.  Heteroskedasticity does not cause bias but it does cause inefficiency (relative to an estimator that controls for heteroskedasticity - if one exists).  What does this mean?  Imagine that you are attempting to model the price of home sales as a function of observable data such as # of rooms, # of bathrooms, yard size, etc.  But there is still a great deal of variation in your outcomes.  You also know a little about the purchasers.  Such as annual income and total assets.  So you want to include this information in your analysis.  You may not think that the income of purchasers does not directly influences the sale price of the home but instead influences the willingness of the purchaser to negotiate (the error is heteroskedastic in purchaser income).  Thus one may argue that the variability of home prices might be a function of purchaser income.

* Let's imagine that we would like to estimate the effect of x on y.
reg y x

* This effect is small and not statistically significant.  We would like to control for some of heterogeneity in order to get a better estimate.

* We suspect the heterogeneity in the error might be related to z.
predict uhat, resid

scatter u z, sort title(Heteroskedastic Normally Distributed Error)
* This is a classic form of heteroskedasticity. 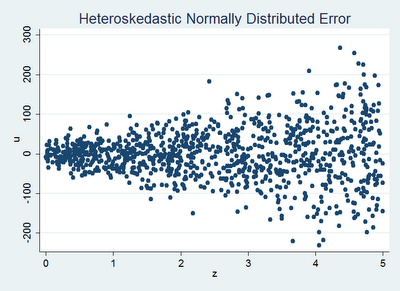 * There are some two step procedures that can be done to control for this form of heteroskedasticity, such as inverse variance weighting.

* However, these methods have been shown to produce bias (when the result of two step procedures  and are in general less efficient.

* The better method is to estimate the heteroskedasticity simultaneously with the coefficient on x using Maximum Likelihoods.

* I will write a small program to do this.

* Following William Gould, Jeffrey Pitblado, and Brian Poi's book on maximum likelihood in Stata an estimation that allows for explicit modelling of the variance can be defined as follows.

* The first argument of any maximum likelihood program is the name of the temporary log likelihood variable created by the stata when the ml procedure is called.
* Each additional argument is an linear "equation" that Stata maximizes by choosing estimators for.
args lnlk xb sigma
* Thus we have two equations that we are asking Stata to solve.

* The following is the log likelihood value that we would like Stata to maximize.
* In this case, it is the log of the normal density asking Stata to choose the optimal mean and standard deviation.
qui replace `lnlk' = ln(normalden($ML_y, `xb', `sigma'))

* This model is nearly identical to OLS except that is going to be slight variation due to the maximization program finding slightly different peaks.
ml model lf myNormalReg (y = x) /sigma
ml maximize

* By specifying /sigma we are in effect telling stata that we know there is a second equation, that we want only a constant estimated for it and we would like to call it sigma.

* What is more appealing to us and the reason we wrote the ML program is that now we can easily specify a structural form for sigma.
ml model lf myNormalReg (y = x) (sigma: z)
ml maximize
* Our estimates on the coefficient on x have improved dramatically.  This is somewhat of a fluke of the draw however.  With a different seed, I found the estimates did not improve uniformly.  On average though, we should expect the correctly specified functional form to outperform the OLS model (in terms of efficiency).

* Now for a slight tangent.  The following estimator does not work for me.
cap program drop myNormalReg2
program define myNormalReg2

args lnlk xb sigma
qui replace `lnlk' = ln(normalden(($ML_y-`xb')/(`sigma')))
* The only difference is that I generate the residuals and put those directly into the normal density function.
* By the definition listed in the help file this form and the previous one are identical.
* So what is the problem?  I think it is a result of sigma being the denominator.
* Perhaps it is harder to maximize this problem than the previous, but if so I do not understand why.

* See comment below for the correction posted by Brian Poi (one of the coauthors of the aformentioned book).
end

* A final note, simply because the Maximum Likelihood procedure assumes normally distributed errors does not mean that the above program will not provide good estimates when the error is not distributed normally.

reg y x
predict uhat, resid
scatter u z, sort title(Heteroskedastic Uniformly Distributed Error)
* The uniformaty of the error is obvious in the plot as a result of the clearly identifiable edges that characterize the uniform distribution. 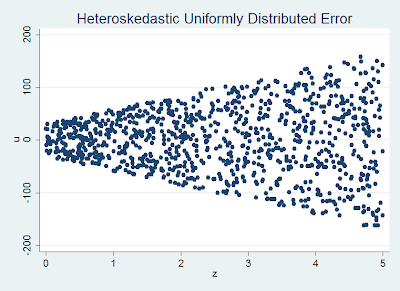