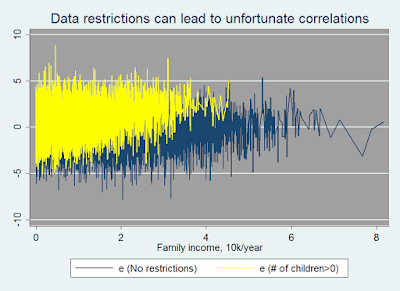 * Generate the number of children each man has
gen Y = .8*man_num_sibs + .6*woman_num_sibs - 2*income + e
label var Y "The true underlying amount of children some men would have"

* Run the program once to generate the data
gen_data

reg Nchildren man_num_sibs woman_num_sibs income
* We can see that all of the coefficients are biased towards zero.

* This makes sense in that it if you restrict the range of the ys.
* Then the magnitudes of the coefficients is also appropriately restricted.

* However, we want to know what the uncensored effect of income is on the number of children is.

* Given the structure of the data we might restrict our sample say only to couples who both come from a family of 3 or more children.

* We can see that the estimates are now less biased if more noisy.  Let's try a further restriction:
gen restrict2 = 1 if man_num_sibs>3 & woman_num_sibs>3

* We can see that the estimates are now less biased if more noisy.  Let's try a further restriction:
gen restrict3 = 1 if man_num_sibs>4 & woman_num_sibs>4

* We can see that the estimates look pretty close to unbiased.
* However, the noisiness of the estimates is so large due to the restricted sample size that it would be nearly impossible for any single point estimate draw to be large enough to reject the null.

* The more concerning thing with a restriction such as this is that it is not clear any more what is being measured.
* Ie. what is the effect of income on children in a family where both parents come from families of 4 sibblings or more and where the income is less than 10,000 a year?
* Are these samples really comparable?

* This is really creating a sort of selection bias.  It does not help out the estimates.

* Because we are simulating data we can actually observe u (because we know Y).
gen u = Y - Nchildren

reg u man_num_sibs woman_num_sibs income
* We can see that all of the explanatory variables are strong predictors of the censorship error.

* Under this estimate the bias is from a different source.  This we can observe as well.

* It is due to there now being a correlation between the original errors (e) and the explanatory variables:

* However, what happens when we restrict the sample?
reg e man_num_sibs woman_num_sibs income if Nchildren>0

* However, fortunately in this case James Tobit made some thoughtful adjustments to OLS:
* Assuming that the error is normally distributed: