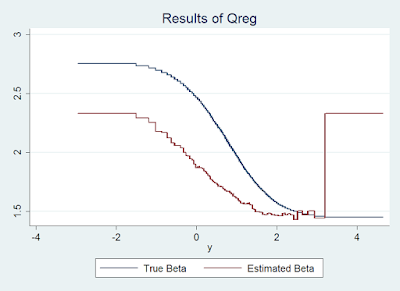 line beta y, sort
* We can see the beta function is changing effect accross the different
* quantiles of y.  We can see that if x1 is a policy variable then because
* x1 is greater for lower ys and smaller for higher ys.  Then the effect of
* sign of the betas is to keep the variance in y constant or even decrease
* it.  It is possible for the variance in y to still be larger if the
* variances of the xs are larger since in effect we are adding two random
* variables together.

* The quantile regression seems to be working mediocre
* at picking up some of the shape of the beta distribution.
* However, near the edges which people are often interested in
* it is failing.

* One might say that this is due to the tails having too few observations.
* However, increasing the sample size to 100,000 gives almost identical results!

* Ah, but hope is not lost.  Stay tuned for future releases of semi-parametric
* estimators!
Posted by Francis at 5/08/2012