I have 3 different potential explanations though there could be more:
1. The cost of operating the train is a constant C per trip.  When the train travels from point A to B the train can take 2N passengers.  When the train travels from B back to A the train can take only N passengers.  The distributes the cost of operation across all passengers per trip.  Thus X=C/2N, for the train going from A to B and 2X=C/N for the train going from B to A.  If the train were to raise prices then consumers would lose some of their Consumer Surplus.  In the train were to lower prices, then it would also lose money and maybe go out of business.  Thus, the market is efficient.
2. The train goes downhill from A to B so the marginal cost per passenger is X.  However, on the way back, the train must spend twice as much on fuel going uphill so the marginal cost per passenger is 2X.  One cannot make a reallocation that would improve total social welfare. 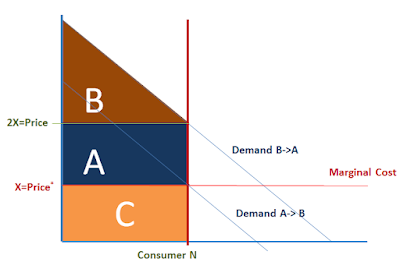 3. Trains are pricing at willingness to pay for the Nth passenger.  No more than N passengers can ride any given train.  On the way there the train charges X because that is the most passenger N will pay.  On the way back the firm charges 2X because that is the most that passenger N will pay.  If the firm charges more, customers would lose out because they have to pay more. Thus this is also an efficient outcome (see graph above)
Posted by Francis at 5/03/2012