Monopolies and Music: How piracy can be socially optimal 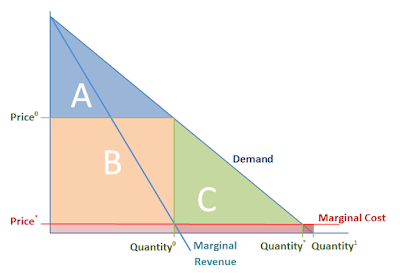 Okay, so I know this is not relating to econometrics or to simulations but here is a bit of my thoughts.

So the question is, "when is that triangle above demand but below marginal cost big enough to matter?"  It is when the marginal cost of producing one unit of the good is large and many people will steal the good if it is produced.  However, this is obviously not the case because each additional song copied in digital format costs next to nothing to those doing the copying and certainly nothing to the company.

Furthermore, it is not reasonable to fine music pirates equivalently to how much they would have had to pay for the songs if they had purchased them. 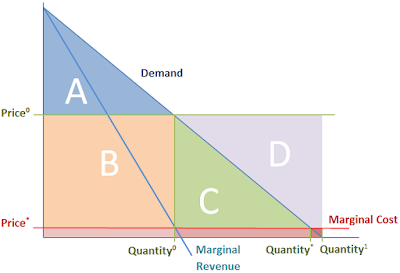 If companies try to sue consumers they are going to try to get not the areas B and C which the consumers stole but also area D.  This area is the amount that the consumers would not have been willing to spend to buy the music they downloaded.

This is all under a framework of relatively steep demand.  Things just get more severe in favor of penalty free piracy when the demand slope become more elastic which is probably more realistic.  An estimate of this elasticity can be found by looking at how many songs the average consumer owned before and after Napster.  This will give an estimate of Q0 and Q1.  If Q1>>Q0 then piracy is probably socially optimal (for music at least).
Posted by Francis at 5/01/2012