* I often worry about linearity assumptions and their
* implications.  However, there are some serious strengths
* to the assumptions of linearity.

gen int_test = intelligence+rnormal()/3
* Imagine we have data from some intelligence test available.
* It is a proxy for intigence but does not truly measure
* underlying intelligence. 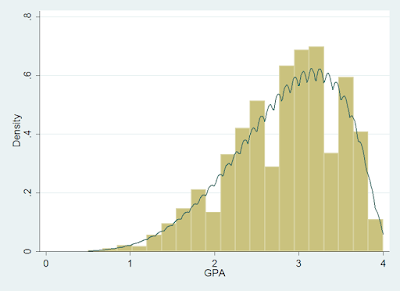 * Imagine that there has been grade inflation

corr education intel_7
* has an even better fit.

corr u edu
* Thus the error term and eduction are correlated.


reg earnings education
* We can see that OLS is biased because of the correlation
* between the error term and the explanatory variable.

* Let us trying including our intelligence test as a proxy for
* intelligence.
reg earnings education int_test

* We can see that the estimate is still biased if not as badly as
* that of not including any proxy.

* Imagine instead of having a corretly scaled but noisy
* intelligence test we have an IQ test that imposes its
* own scale on intelligence from a noisy measure.
reg earnings education IQ_test
* This creates a more biased measure.

* Now imagine you do not even have an intelligence test but
* instead GPA which imposes its own inflated scale as a measure
* of intelligence.
reg earnings education GPA
* This estimate is more biased.  Ultimately, this is because
* intelligence is more correlated with IQ than GPA.

* Note, that even though GPA is a bad measure it is still a better
* proxy than intelligence.

* Now, the thing about this data is that you need not worry too
* much about the proxy's for intelligence or even intelligence
* for intelligence is assumed to be a fixed factor in your data
* and the effect of intelligence can therefore be controlled
* by a simple fixed effect model.

areg earnings education, absorb(id)
* This shows the immense power of having panel data.  No matter,
* the relationship between fixed unobserved variables, and the
* explanatory variables, and the error.  So long as the effect
* of intelligence on the returns to education is linear. A simple
* fixed effects model is sufficient to control for this bias.

* However, if the returns to education (the coefficient) is also
* correlated with intelligence (reasonable) then we are in a different
* much more complicated scenario and we had best start thinking
* about the world of Correlated Random Coefficients.